Skip to content
Lucky Kids » Blog » How can a child improve their English speaking skills?

How can a child improve their English speaking skills? 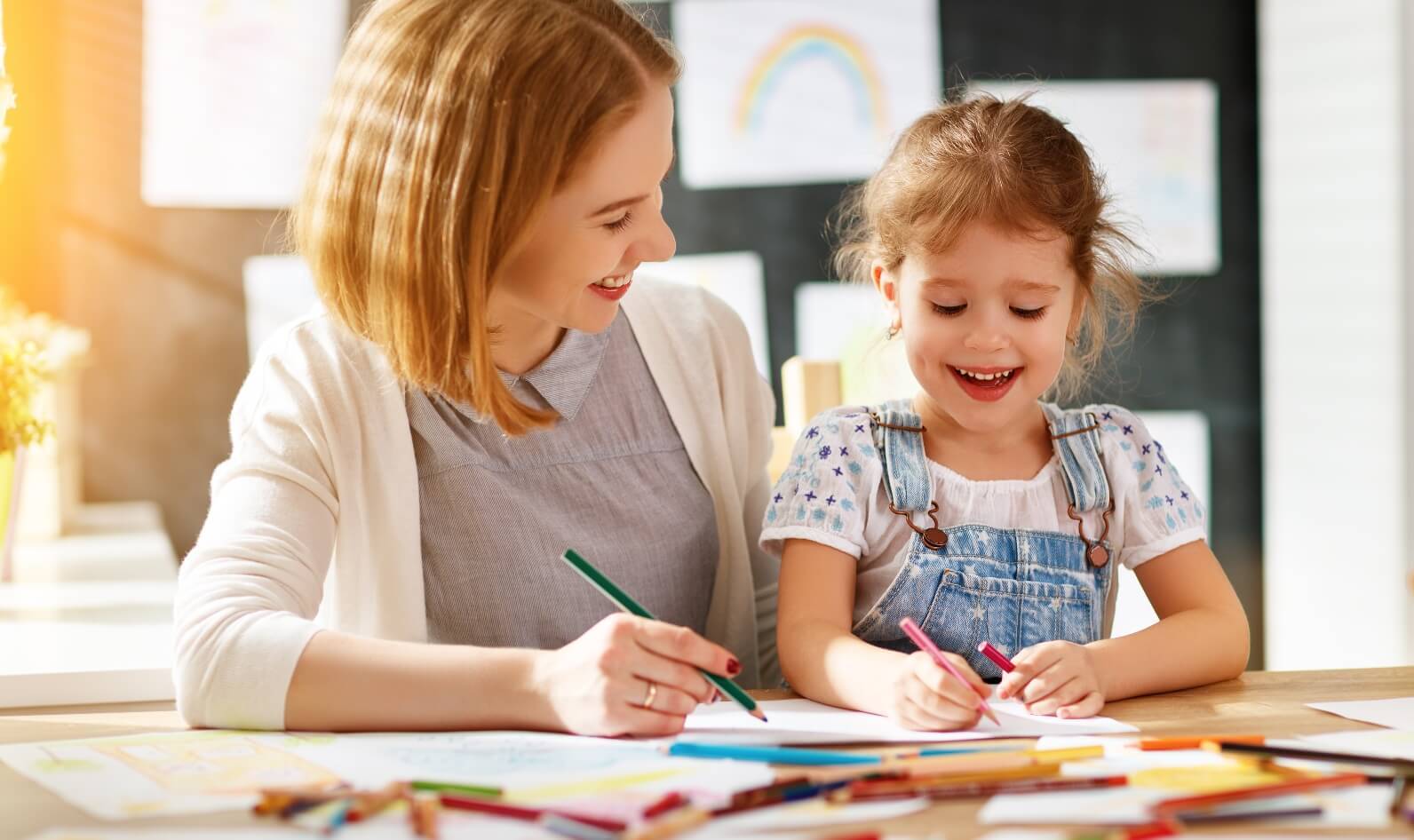 Main methods, advantages, disadvantages and recommendations from teachers. Can parents help with this?

It is important to understand that the language principle in early communication models involves the development of five areas of oral language:

All these parts give a complete picture of how a child acquires more and more subtle, bizarre and complex speaking skills.

This is the science of sounds. From an early age, children hear the sounds (phonemes) in their native language from their parents. Thus they have an example to follow and gradually begin to repeat and pronounce them better and better. *

The first labial sounds “m”, “n”, “b” are easy to imitate and therefore they are among the first sounds made by a baby. The baby improves and adds loud sounds. That’s why some of the first syllables for  “grandma” or “mom” or “dad.”  Baby “chatter” is the first attempt at effective communication.

The use of phonemes and the acquaintance of the child with them is of great advantage for unlocking his correct language development. A number of language systems carry out this training, gradually and with upgrades.

To the parents: Here the parent plays a major role. Through his speech, every day, every minute the child hears and makes language stocks. Here the principle applies – the more, the more.

That’s why we strongly recommend early language communication with babies and children in preschool. Speaking, talking, poems, rhymes, songs, even impromptu conversations (which on the part of the baby or child can be completely incomprehensible), these are the secrets of “speaking”. The parent is his child’s first language teacher and it is very important that he understands this role. No one else will fulfill his task – the child understands, tries to imitate and follow those who care for him with love.

They appear at a slightly later stage. This is the time when the child has accumulated a certain stock – about 14,000 words, until the moment of his admission to kindergarten. The foundations have been laid and it is the teacher who fine-tunes the child’s speech.

It is important for the teacher to know that it is best to work through repetition, avoiding correction. To be honest with the child and to share everything, to explain to him constantly, even when it seems that he does not hear or does not understand.

Children are open to their teachers – as they are the first role models after parents. There is no better motivation for learning  than the trust and love of the child. If you work through them, everything becomes easy to achieve.

This is the science of properly structuring speech. Each language has its own rules to which it obeys. The children learn them imperceptibly, in their first speech experiments, among the closest people, and subsequently improve them in kindergarten and school.

Advantages : Spoken language cannot exist if it does not obey the generally accepted structures and grammar. The grammatical rules appear, which lead to the improvement of the child’s language.

They are the people who imperceptibly teach the first grammar to their children, speaking to them correctly and in full sentences. It is extremely important for the parent to say: “This is a very beautiful vase full of red roses”, instead of just individual words like “vase”, “roses”.

Expressing a thought in the form of a completely syntactically correct sentence is a lesson that achieves amazing results. Our advice to parents is: Speak to your children,  speak to them correctly, with long explanatory sentences, do it constantly, read to them. Be patient and careful, talk to them calmly, understand them – often they can not express their needs and therefore sometimes upset, cry or behave unacceptably.

Find out, through conversation, what upsets them, ask a lot of questions and your child will talk, will explain to you, albeit in a roundabout way. Language is also finely connected with the child’s psyche – it often carries information about what is happening in the child’s mind.

In preschool, more important is the role of the teacher, who is a native speaker and who is an authority for the child. That is why everything he teaches is “law” and usually children do not have a problem with motivation to follow it and perform its tasks, explanations, rules.

The teacher, as a professional, can pronounce the words correctly, pay attention to every sound, to any deviation from the usual, repeat as many times as necessary. Often this patience plays the most important role in motivating the child to speak correctly, to communicate.

This is the science of the meaning of words and concepts. Children learn that some words also have an abstract meaning – for example, a “sister” is a close relative who is a child of the same parents.

Semantics is one of the favorite language sciences. It unfolds all the splendor of a language, and if the teacher manages to ignite the child’s love of language, he can develop his speaking skills to perfection.

I always sincerely admire parents who find the time and desire to explain to children the words and their meaning.  It’s so invaluable that I can’t even define it as “important.” It is part of the legacy that a parent can leave to their child. A legacy that he uses all his life, every day.

Here the role of the teacher is more than favorable. Any language teacher can explain the meaning of a word.  It is more valuable, however, if he / she expands the meaning of the word, covers its language nests,  gives examples and uses. For example: work – to work – work out and so on.

Each word can be used in a sentence and demonstrated in its full meaning. The child has not only learned three words instead of one, but can distinguish verb, noun, adjective / adverb, that is, begins to deal with syntactic categories, to follow grammatical rules.

In this way, the teacher expands the child’s vocabulary exponentially or achieves the so-called  “language outburst.” The effect is many times greater than giving only one word with one or two meanings.

Morphology is the science of morphemes or the smallest linguistic units. For example, “elephant”, “bug”, “the” are words, but they are also self-existing  morphemes. We call them independent morphemes  because they are separate words with their own meaning. However, some of the morphemes are dependent, they cannot exist separately.

For example, in the pair “kind” – “unkind”; the morpheme un defines  the opposite meaning of the word. These are the so-called prefixes, suffixes and endings that often change the meaning or grammatical category of the word.

Morphology is the next stage of language development. It is no coincidence that it is present in school after the period of initial literacy. Children compose new words, learn to use morphemes, apply rules for the formation of new language units.

When a parent speaks to his child and uses more complex words, formed with a variety of morphemes, he is constantly enriching the child’s speech culture. In case he lacks such a stock, he can turn to the best navigators in language development, authors of children’s books. Reading stories and tales, with rich vocabulary, syntax and morphology, can bring the missing knowledge through interesting stories and in a non-violent way.

Use and development of speaking skills, polite language

In many societies, children need to use appropriate forms of polite communication – called “pragmatic polite language.” All these words: “thank you, please, sorry, pardon” are part of the language culture as they play extremely important role in how the child will be defined – with “good” or “naughty” behavior.

Greetings and short words of courtesy often show how the child socializes. Children can be taught to greet adults with “How are you”, and to address friends with “What’s up”.

In this way, they “store” expressions that are pragmatically required in specific social situations. After a certain age, children can accumulate more formal expressions, which are pragmatically required of them in some social conditions of communication: “I do hope that we see each other again soon. It has been a pleasure meeting you. ” The more sophisticated ways of communicating, respectively speak of  a richer language culture  and more sophisticated language skills.

In summary, parents and teachers play the most important role in children’s language development. They are the first speakers of the language, the first teachers to determine the first contact with it.

The most valuable skill for every child depends on them – the motivation to learn, to continue to improve themselves.

Language, as a  determining factor of the child’s reality, is the most important part of the preparation for his future life of a mature and fulfilling person.

2020-06-22
Previous Post: The study of idioms by children
Next Post: What do children learn from English grammar?